What are Trade Associations?

Trade Associations are the oldest and simplest form of combination. These are the organizations formed to serve particular branches of industry and trade and to protect their common interest.

A trade association can be defined as 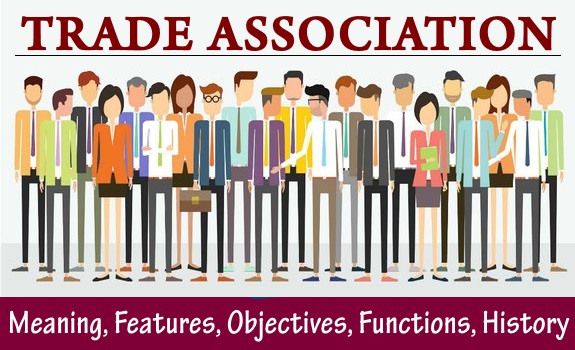 In other forms of combination like merger, amalgamation, pools, cartels etc., two or more concerns are joined together for increasing the amount of profit by way of influencing their production, sales or pricing policies. Trade associations have no such objectives.

For understanding the special characteristics of the trade associations, we shall briefly enlist them.

This form of organization is so loose and informal. The membership is open to all traders and they are at liberty to quit from the association at any time they want. In other words, trade associations neither interfere in the internal management of a member unit nor impose any penalty for violating the code of business conduct. As such, they are purely voluntary associations.

Trade associations do not conduct any business of their own and have no direct objective of profitability in view.

3. Scope of the Association

Trade association is generally formed to promote and protect the interest of the people engaged in a particular trade, industry or business.

The main source of income of the trade association consists of entrance and subscription fees collected from the members. The expenses of the association are met out of this income.

The trade associations are generally registered under the Trade Union Act or Companies Act. Again they may be formed as companies with or without share capital. If it is formed with share capital, the members should purchase the shares. Generally, these associations are formed as companies limited by guarantee. But registration under any of the above Acts is only optional.

Objectives of the Trade Associations

The functions of the association are generally determined by their constitution. They are formed with varied objectives and their pattern of organization also differs. Moreover, their objectives differ from association to association depending upon the type of trade or industry they represent.

However, H. Haney, a well-known author made an attempt to classify the objectives into four types, which are as follows:

1. To increase the individual efficiency through education.

3. To project or extent trade as a whole through legislation.

4. To develop the trade as a whole through technical work.

Besides, the associations may have other specified objectives also.

Functions of the Trade Associations

To attain the above-mentioned objectives, the trade associations generally perform the following functions:

2. Conduct industrial and market research, collect statistical data and make available the findings to the members.

3. Formulate a code of business conduct and help to encourage business ethics among members and put down or eliminate unfair business practices in the trade or industry concerned.

4. Conduct conferences and arrange conventions with a view to bring together the members or representatives of the trade and industry.

5. Collect and supply information to the members on matters such as prices, Government regulations, market news, taxes etc.

7. Publish trade magazines and release periodic bulletins on topics of interest and thereby help to educate both the members and the general public.

Besides, a few trade associations also arrange for the settlement of trade disputes among their members, help to collect bad or irrecoverable debts etc.

History and Evolution of Trade Associations in India

It should also be remembered that during greater part of the nineteenth century only the European Merchants formed trade associations. The Indian Merchants did not take much interest in the early days of their evolution. It was only in 1875 that the Bombay Mill Owners’ Association was formed by the joint effort of the Indian and European businessmen. But the progress was slow till the early thirties of the 20th century.

These associations cater to the needs and causes of trade, commerce and industry on all India basis, or regional basis or local basis. Of them, only a few associations are functioning on national basis while a majority of them are confined to limited areas such as towns, cities etc. National level organization represents different sections of the industry. Local associations represent the local businessmen and the traders in common.