What is Principle of Causa Proxima? | Meaning and Examples

What is Principle of Causa Proxima? 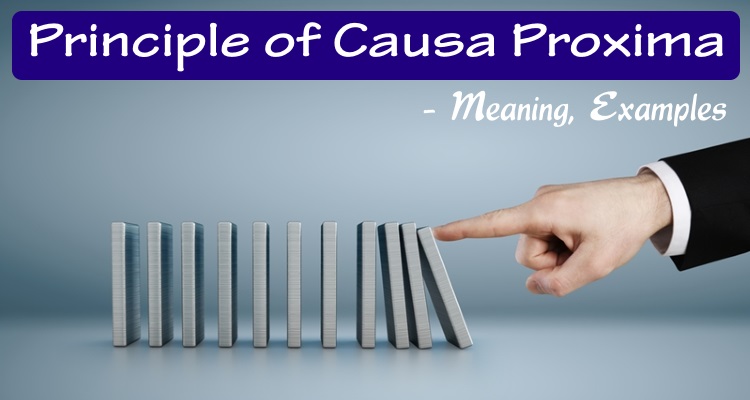 Proximate cause means the active, efficient cause that sets in motion a chain of events which brings about a result, without the intervention of any force started and working actively from a new and independent source.

The proximate cause is not necessarily the first cause, nor the last cause; it is the dominant, efficient or operative cause.

The following examples will help in illustrating the meaning of the doctrine of proximate cause:

Mr.A has taken a marine policy to cover the goods exported by him. Under the policy, goods have been insured against damage likely to be caused by sea water. During the voyage, a hole was caused at the bottom of the ship. Through this hole, sea water has entered into the ship and damaged the goods insured.

In this case, there are two causes of the mishap. First, the hole that was caused in the bottom of the ship and second, the seepage of sea water into the ship. The nearest cause of the damage caused to the goods is the seepage of the water, the hole in the bottom of the ship being the remote cause. Therefore, ‘A’ must be compensated for the loss suffered due to damaged goods, covered by the policy.

In a similar case, a wall of a building was damaged due to fire. Before it could be demolished or repaired, it fell down due to a storm and it damaged an adjoining building. The owner of the adjoining building claimed the loss under the fire policy.

In this case, the court held that fire was a remote cause and proximate cause was storm and the claim is not payable under the fire policy.

In one case, oranges and lemons were insured as cargo against collision of ship. Actually the ship collided and was put into the port for repairs. For convenience of repairs, the cargo was unloaded on to lighters and reloaded on the ship after repairs. The fruits when reached destination were destroyed.

In this case, there were two causes of loss i.e., collision of ship, unloading and loading of cargoes. The perishable nature of and unloading, loading of cargoes were the proximate cause. This was not insured and no damage was paid.

An insured sustained an injury in a motor accident and was admitted in a hospital. While taking treatment in the hospital, he contracted an infectious disease which caused his death. The court held that the proximate cause of death was the disease and the original accident was merely a remote cause. As such, the claim is not payable under personal accident insurance.

From the above discussion, it is quite evident that the insured is allowed to recover the loss from the insurer only when:

The insurer is, therefore not liable for the loss due to a proximate cause which is not an insured peril.