What is Combination Trust?

Trust is a form of business combination evolved to do away with the weaknesses of pooling agreements, which were suffering mainly from instability and imperfect centralization of direction and management. As such, a trust is a more stable form of organization. 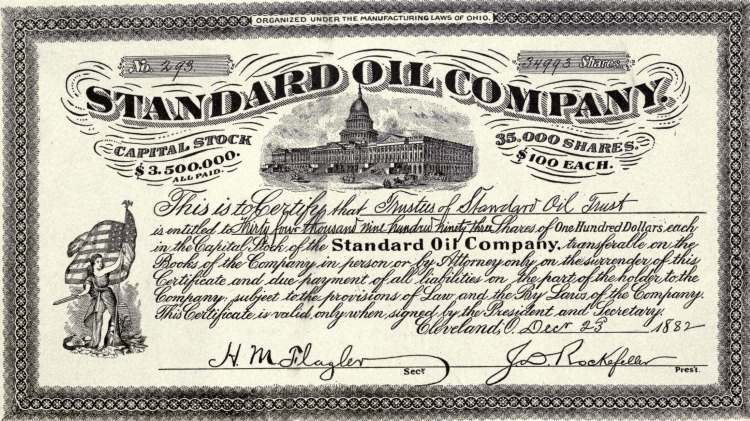 The trust movement was originated in U.S.A. in 1880 as a device to check the cutthroat competition. The first trust formed in 1882 was the Standard Oil Company.

Meaning and Definition of Trust

A trust is a partial consolidation of firms either horizontally or vertically or both in order to obtain the benefits of integrated management and centralized control.

According to LH. Haney, a combination trust can be defined as

a form of business organization established through temporary consolidation, in which the stockholders of the constituent organization under a trust agreement transfer a controlling amount of their stock to a board of trustees in exchange of trust certificates .

The income earned by the constituent unit is pooled and it flows into a common fund controlled by the trustees. The trustees will pay the amount of dividend to the certificate holders in proportion of their interest as shown in the trust certificate.

Another form of trust came into existence in U.S.A. is “Voting trust“. It is a modified form of the combination trust under which the holders of majority of stock transfer their holdings to the trust but the right to receive dividend directly from the company is retained by them.

Features of the Combination Trust

The important features of the combination trust are as follows:

1. The trust are incorporated bodies and they are enticed to issue trust certificates to the shareholders of the companies who agree to transfer their shares in favour of the trust.

2. The dividends on such shares constitute the income of the trust. Hence, the shareholders who have transferred their shares have no right to receive dividend from the companies directly or to sell their holdings to some other person.

4. The constituent companies do not lose their separate existence and in fact they are independent.

The combination trust has the following advantages:

1. The combination trust is more stable and enduring than other forms of combinations like associations and federations.

2. The trusts bring about a complete unification of direction and control over the constituent companies.

4. As the trusts enjoy complete control over the market, they can regulate the output and price more effectively and easily than pooling agreements or cartels.

5. Inefficient units can be scrapped, as there is complete unity of control and direction.

6. The supply can be adjusted to the expected level of demand.

The combination trust suffers from the following limitations:

1. Formation of the trust is comparatively difficult and elaborate legal formalities are required.

2. Trust may lead to undue concentration of economic powers into the hands of a few i.e. the trustees.

3. Since the trust can effectively control and regulate the output, artificial scarcity can be created and the consumers may be exploited.

4. When the number of constituent companies is large, it is practically impossible for a few trustees to manage all of them.

5. There is always danger of over capitalization. The Trusts of the U.S.A. indulged in unfair activities and exploited the consumers to a greater extent. Consequently the Anti-Trust Act was passed in 1890 declaring the trusts as illegal. Thus the combination trusts were given a prompt burial.

Distinction between Cartels and Trusts

The important points of distinction between cartels and trusts can be outlined as follows:

1. Trusts have their origin in U.S.A. while Germany is the home of Cartels.

4. A trust may be horizontal, vertical or a combination of both. A cartel is always a vertical combination.

5. The member of the cartel can withdraw their membership at any time. But the shareholder who has transferred their shares to the trust cannot withdraw on their own accord.

6. A trust secures the economies of large-scale production, while a cartel cannot secure them.

7. The trust tries to control production as well as distribution. A cartel aims to control only the marketing processes and does not concern itself with the production.