Captives are insurance companies formed by companies or associations for insuring their own requirements. The owners of the captive are also the insured and they take decisions on investment, underwriting etc.

The following charts shows the types of captives. 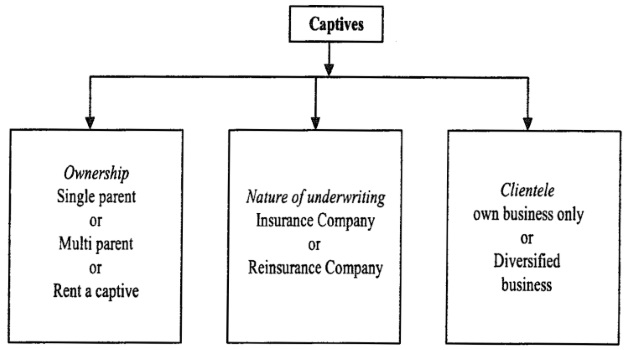 Multi-parent captive are usually formed by associations or medium sized companies to enable pooling of resources and spreading of risk.

Captives can also undertake business other than its parent company business and such captives are called diversified or market captives.

Association captives cater to an industry group or association exclusively. Some countries also have a concept of rent a captive. In such arrangements, the risk is passed on to a reinsurer (or insurer offering such facility) who in turn maintains a separate account (Rent a captive account) for this purpose. Premiums are credited to this account and claims adjusted. The company using this facility gets the advantage of its good claims experience. The captive is not owned by the insuring company but only rented. 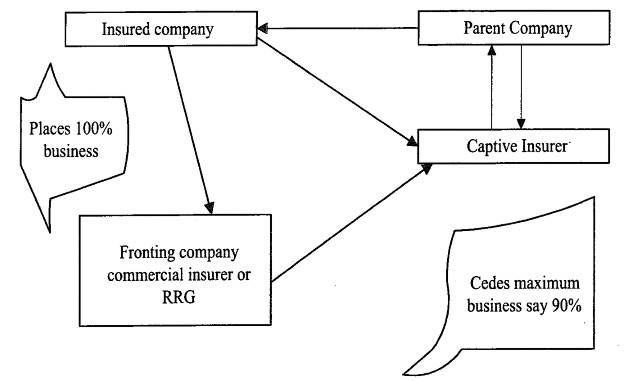 Some major advantages of a captive are:

1. Premium flow is retained by the company and so the advantage of time lag before settlement of claims and consequent investment income is available to the parent through the captive.

2. Captives are a legitimate way of transferring assets where the values involved are high. For example, a company pays an insurance premium of Rs.1 crore and the past history shows a low claim ratio (e.g. in fire premiums). Over a period of time, this could accumulate into a corpus including the investment income from the saved premium when it is handled by a captive while reserves and other funds are open to creditors, the same is not true for captives. As captives are insurance companies except for their statutory regulations, these funds can be used for reinvestment in the parent company.

3. Captives give direct access to reinsurance markets and so flexible product offerings and better rates are possible due to varied regulations and captives in international markets.

4. Benefits of the lower costs of pure risks can be had since the commercial insurance premium usually includes a substantial portion of non-claims costs also. This is particularly so where the claims of the company is better than the average portfolio of the insurance company. Bad risks in the insurance company’s books increase the cost for the good risks.

5. Tax benefits of off-shore captives. Post tax reserves are converted to pre-tax, premiums. Premiums paid are tax deductible in many countries. However tax, treatment of captives differs in various countries and currently this may not be the major reason for captive formation.

6. Since captives are registered insurers, they cover requirements for compulsory insurances also.

7. The cover offered by captives need not be the traditional insurance plans but almost anything including product recall and extended guarantees promote a product.

8. Control over litigation and legal process would be with the parent rather than a third party insurer. Further the captive could issue liability expenses alone policy instead of a liability policy to deter opportunist lawyers from suing for profit.

9. Large commercial insurance deductibles can also be covered by captives.

Captives carry their costs which have to be weighed against the expected benefits. Since captives are insurance companies, they are associated with all the costs and risks of an insurance company. These are:

1. Claims cost which may vary from expected values causing fluctuations in its profitability. Thus there maybe larger claims of more number of claims in the first year itself. Since loss estimates are based on past data and probabilities, the actual values could be different from expected values due to changes in underlying parameters or faulty estimation.

2. The funds maintained to finance losses may be subject to investment-risks and may not yield the expected returns or may even sustain losses.

3. Administration of a captive requires expertise and the costs of managing it will also have to be considered. In case the captive is mismanaged, it may lead to both a loss of capital and an unexpected loss to assets which cannot be made good.

4. If it a single parent captive underwriting only its parent company’s business, the regulators may not grant the tax benefits of insurance premium. Hence sound tax considerations have to be built in. A major misuse of captives is where premiums are paid to the offshore company and then routed back as profits to the parent organization. This results in tax evasion which regulators are wary of. Such captives are also called shell captives. In addition to tax liabilities, such captives could also lead to criminal prosecution.

5. Funds may diverted away from main business line towards the captive insurance company.